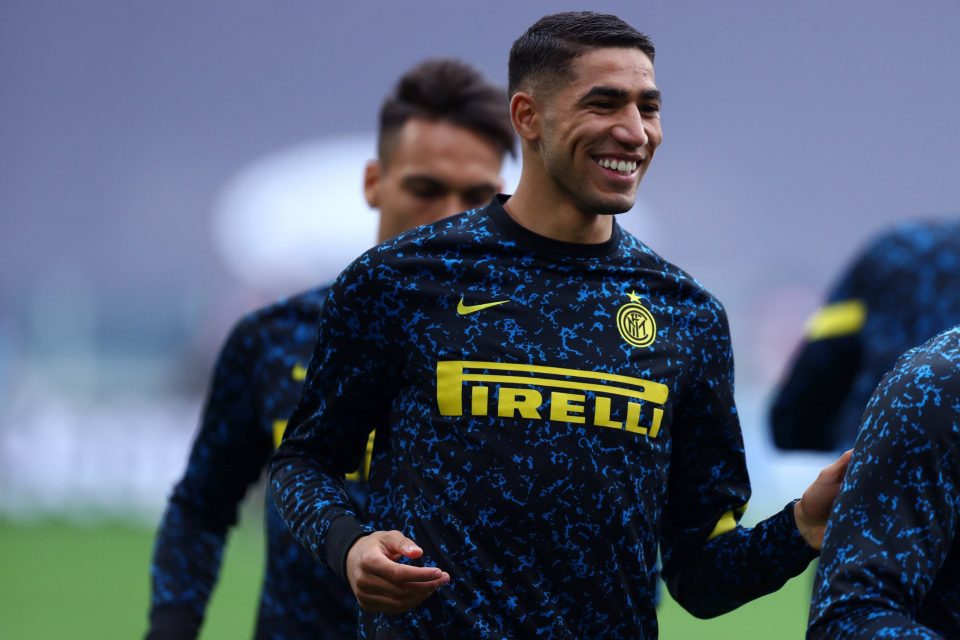 Achraf Hakimi has taken his game to a whole new level since joining Inter, according to Nerazzurri legend Maicon.

Inter signed Hakimi in a €40 million deal from Real Madrid last summer and the Moroccan international was instrumental in their Serie A title success.

Hakimi has scored seven goals and provided 10 assists in all competitions, leading to many comparisons with his predecessor on Inter’s right wing.

Asked if he saw any comparisons between himself and Hakimi, Maicon told StarCasino Sport on Thursday: “I don’t think so, we have different characteristics and everyone has their own qualities.

“But Hakimi is definitely a strong player who’s had an incredible season.

“He had already played in great teams before Inter, but he hadn’t shown what he’s shown here at Inter.”

Maicon made 248 appearances in a five-year spell at Inter, scoring 20 goals and winning countless major trophies.

The Brazilian was asked to pick his favourite goal in a Nerazzurri shirt and his mind immediately went back to the Milan derby in May 2012.

“The goal in the 4-2 win over AC Milan was a beautiful goal right in the top corner,” Maicon recalled.

“You don’t see many goals like that, apart from with a few players like Dejan Stankovic or Wesley Sneijder, but I’d never scored one like that.”

Maicon’s favourite moment with Inter came in their historic treble campaign, specifically the 2-0 win over Juventus towards the end of the season.

“That was my most difficult goal for sure,” he argued.

“We were going through a tough moment in the league and we knew if we won that match, the Scudetto would be in our own hands.”

Maicon picked Zlatan Ibrahimovic as the toughest opponent he ever faced, saying about the AC Milan striker: “There was something unique about him that told you he would become an incredible champion.”

Maicon also recalled the glorious feeling of winning the Serie A title at Inter and had loving words for the club’s supporters.

“Mamma mia, it’s such a beautiful feeling to win the Scudetto,” he admitted.

“When we won our first Scudetto (2006-07), people were saying it was false because Juventus were in Serie B and AC Milan finished 16 points behind.

“But then we won four in a row and then people started giving us the credit we deserved.

“The feeling after you win it is quite something, I won four in a row and I really am pleased to have won them with Inter.

“They’re a team that deserves a lot, with an incredible fan base that I have never seen in any other club.

“I’m happy to be part of this family.”

Maicon was also asked if he would swap Inter’s UEFA Champions League triumph in 2010 with a FIFA World Cup title for Brazil, but the Brazilian was having none of it.

“Brazil will win the World Cup again, with or without me, but the Champions League was beautiful because it hadn’t arrived for years.

“Massimo Moratti made a huge push to win it.”