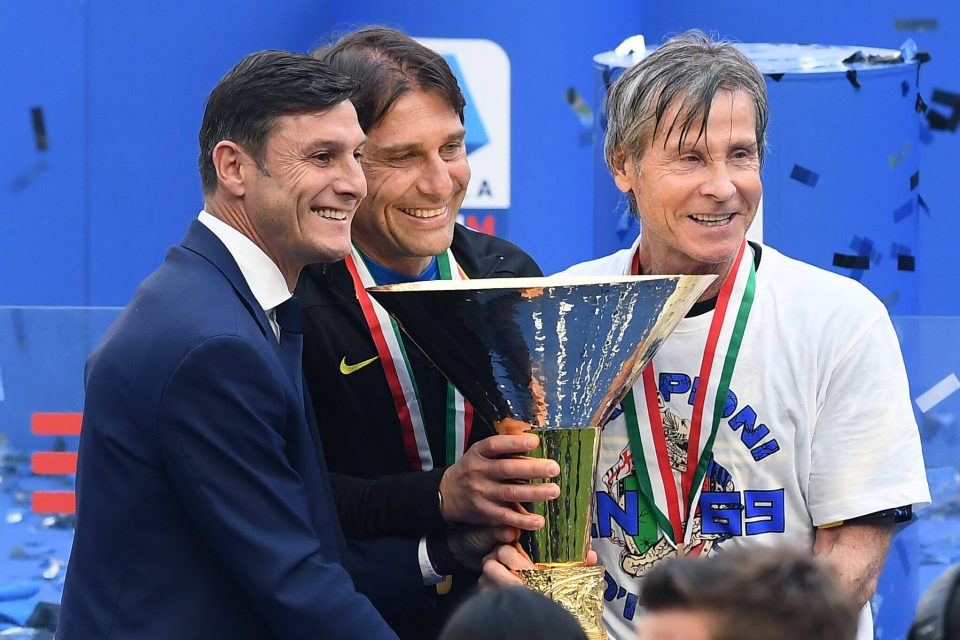 Javier Zanetti has thanked Antonio Conte for the ‘extraordinary’ job he did at Inter after his incredible departure tonight.

Inter confirmed earlier this evening that they had parted company with Conte by mutual consent after two years working together.

Conte leaves after winning the club’s first Serie A title since 2010, which was secured in triumphant fashion with four games to spare.

“I’ve had the privilege to work by your side in these two years,” Inter vice-president Zanetti wrote to Conte on Instagram.

“As well as the professional side, where your day-to-day work has been extraordinary, I will miss the human aspect of a great working group.

“Always together, united, with the objective of doing what’s best for Inter despite all the difficulty.

“I wanted to thank you from the bottom of my heart for everything you’ve done for us, for Inter where you won’t be forgotten and where you’ve written another extraordinary page of our history.

“I’m sending you a big hug, exactly like we gave each other before each game, and the kind of hug I think every Interista would want to give you.

“Working with you and your staff, Antonio, has been an honour and a real pleasure.

“I wish you the best for your future, you really deserve it.

Conte has left the club after owners Suning made it clear they would need to downsize their project and cut costs ahead of next season.

Simone Inzaghi is thought to be the leading candidate to replace him as Inter’s head coach, although former Juventus boss Max Allegri is still in the frame for the moment.

Lazio boss Inzaghi met Claudio Lotito for talks over his future tonight and stayed cautious when asked by reporters if he would be staying in the capital, replying: “We’ll see.”