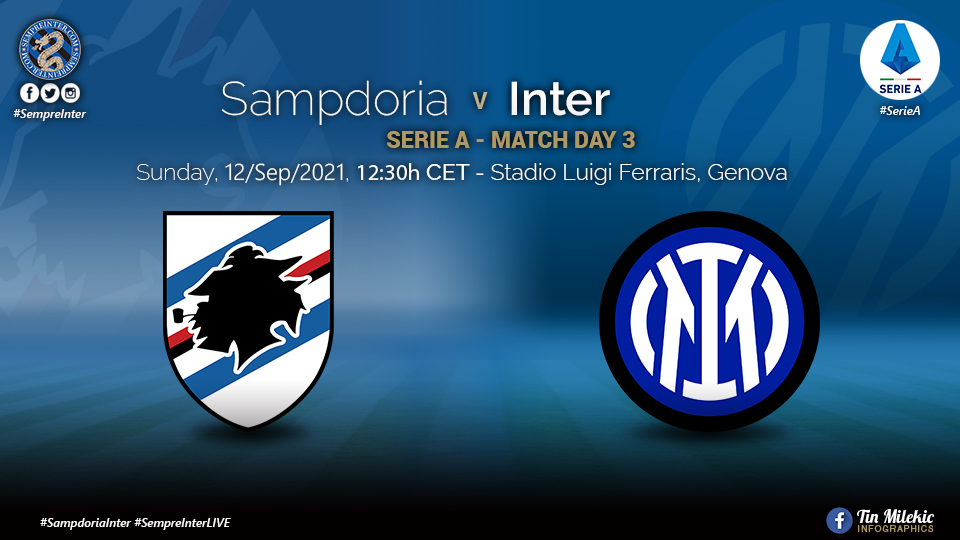 With two convincing wins behind them, Inter travel to Genoa to face Sampdoria at the Luigi Ferraris stadium, looking to make it three from three. Match tomorrow Sunday at 12:30 CET.

Having started their season off quite well, Inter must now navigate the tricky task that is Sampdoria in Genoa if they’re to maintain their perfect record.

This objective is made more difficult by the fact that the match come straight after an international break which has been quite taxing on the Inter squad, particularly the South American contingent.

Roberto D’Aversa inherited a strong and solid Doria from veteran tactician Claudio Ranieri; the team has a strong spine of veterans and with Fabio Quagliarella and now Francesco Caputo in attack, Sampdoria possess the league’s most experienced front line.

D’Aversa is no nonsense meat and potatoes kind of manager. Expect him to approach this match in a straightforward “defend first then worry about scoring” manner. It will be up to Simone Inzaghi to find the keys to unlock the hosts’ defences.

Inzaghi is largely expected to rotate the starting eleven substantially, not only is the squad coming off an international break, but Inter face Real Madrid at home in the Champions League opener midweek.

That said, Inzaghi possesses certain solutions that he has not utilized so far that may prove the difference makers against Samp.

Alexis Sanchez, Stefano Sensi and Federico Dimarco are just a couple of the names that Inzaghi might use to spaces between the lines of the expected resilient Doria defense.

If Inter are to mount a serious defense of their title, they must make sure that matches against “weaker” opposition are won.

It appears that all the news coming out of Appiano is guardedly positive. Stefano Sensi’s rumoured injury seems to have been overblown and the playmaker has assured Inter fans through his social media that he will be fit to play on Sunday.

Alexis Sanchez is also finally fit and back from his injury, the Chilean international will be available for selection and might actually get a start seeing that his attacking colleagues all worked hard on international duty.

Last 10 Head to Head: There have been no draws between the two sides in the last ten matches, with Inter winning seven times to Samp’s three victories.

Alexis Sanchez: With the Chilean finally fit to make the matchday squad, expect the forward to want to put in a performance to stake his claim as a season protagonist for Inzaghi’s attacking plans.

Inter’s market moves in the attacking department mean that spaces and playing time will be limited, El Nino Maravilla knows that he must make the most of any playing time to continue playing an important role.

Prediction & scorers: Sampdoria 1 – 2 Inter; with Sanchez and Gagliardini edging it for the visitors.

Concluding remarks: Coming off an international break where almost all of the squad’s starting eleven were heavily involved with their respective national teams, this match can be a real banana skin.

Expect Sampdoria to score and to make lives difficult for the visitors, but expect Inter’s quality to ultimately make the difference.