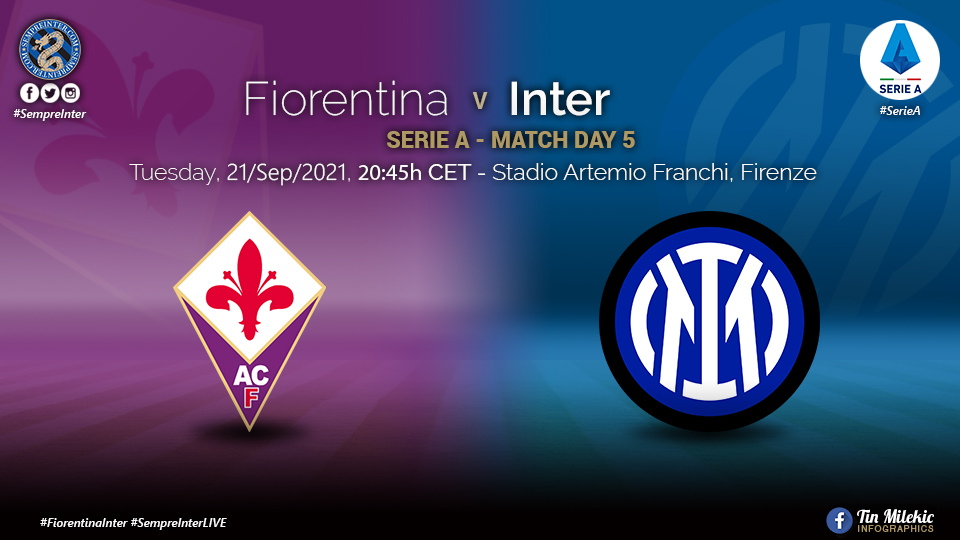 By demolishing Bologna on Saturday, Inter now sit two points off the top of the table with the chance of moving up as sole leaders if they manage to beat a tough Fiorentina midweek, albeit perhaps temporarily. Match tonight Tuesday, at 20:45 CET.

The impressive young coach Vincenzo Italiano has taken over from Beppe Iacchini at the helm in Florence and has had a great start to the season so far.

Opening day disappointment against Roma aside, the Viola then went on to beat high flying Torino, potential title contenders Atalanta and Genoa.

There’s no doubt that the Florentines have a whole lot of talent in their squad, their young forward Dusan Vlahovic is one of the continent’s most sought after talents.

Vlahovic is supported by an almost equally impressive midfield that features Gaetano Castrovilli and the seasoned Giacomo Bonaventura.

Simone Inzaghi’s men must navigate the game very intelligently; they will need to attack and use the entire width of the pitch to counter the hosts’ expected 4-3-3 formation, but they cannot leave too many spaces in the middle of the pitch preventing the Viola from coming at their defensive trio in force.

One of Antonio Conte’s Inter’s hallmarks has always been control of the match, and what Inzaghi’s rendition of the Nerazzurri now seems to be exhibiting is the same balance across all areas of the pitch.

If Inter want to be true title challengers, it’s the difficult matches where they need to find a win regardless of any other externalities.

Joaquin Correa will join Arturo Vital in missing the match. The Argentine attacker hasn’t recovered from the injury sustained over the weekend to make the trip to Florence.

The pair, along with the long-term absent Christian Eriksen comprise all of Inzaghi’s absentees.

Last 10 Head to Head: Despite Inter holding a commanding lead of five to one wins over their hosts, last season’s win at the Franchi was the first time the Nerazzurri took home all three points in Florence since 2014.

Denzel Dumfries: The Dutch wide-man put in a potentially career defining shift against Bologna on Saturday. Not only did Dumfries dominate the right flank going forward, terrorizing and yellow carding two separate Samp defenders, but the Dutchman put in more than a solid defensive shift as well.

If Denzel can continue playing like he did on Saturday, expect Interisti’s post-Hakimi blues to quickly evaporate.

Concluding remarks: This is a very difficult match. The Artemio Franchi has historically been a difficult ground for the Nerazzurri to visit, and seeing that the Viola have started the season in pretty strong form, Inzaghi will need the best out of his men if they’re to continue racking up the points.