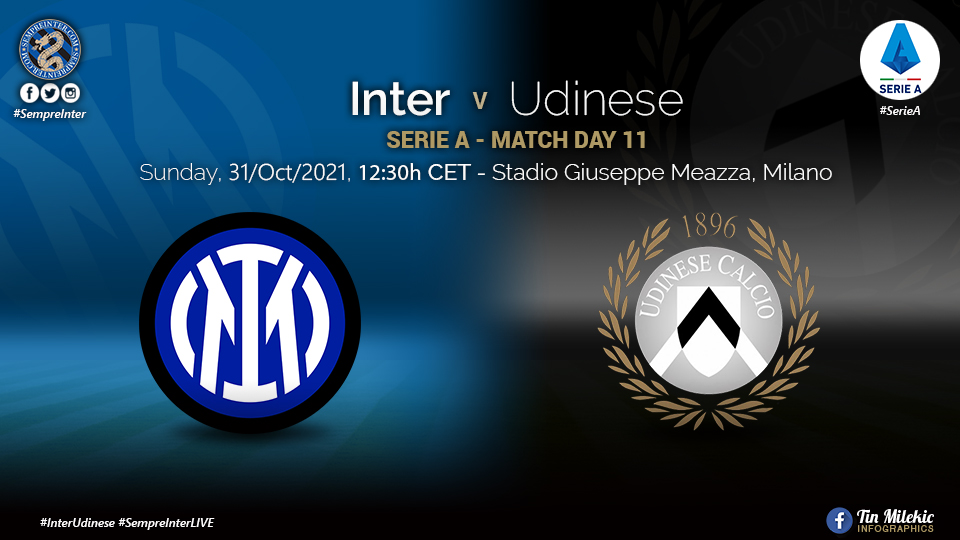 The Nerazzurri are about to go into a very tough run of matches that include the Derby, an important clash against Napoli and a pair of matches in the Champions League that will probably determine the team’s fate in Europe.

Having beaten Empoli midweek, a win against Udinese would set the Nerazzurri on the right mental track going into this run of games.

Luca Gotti’s Udinese have had a proper roller coaster of a season so far; an impressive trio of strong results was followed by a trio of consecutive losses which then led to a quartet of draws that the visitors take into this match, it is thus a bit challenging to predict they’ll bring into this match.

What is for sure is that Udinese is a plucky side that’s unwilling to accept defeat. They’ll pose a difficult test for the hosts if underestimated.

Speaking of the hosts, Inzaghi seems to be slowly understanding the expectations and limitations of his side, and building the team framed in this context.

Inzaghi’s Inter is generally aggressive and offensive, but seem to lack the defensive solidity especially when transitioning back into defense.

If Inzaghi is able to bring out the best out of Denzel Dumfries on the right flank, Inter’s overall balance would be much more attuned.

Expect an aggressive Inter that wants to kill the match off quickly and keep a clean sheet. Should this transpire, it would prove a substantial step forward in the club’s development.

Other than the news of Lautaro’s renewal, all information coming out of Appiano seems to be positive. Inzaghi’s treatment room is clear, and the manager is expected to apply some extensive squad rotation on the side.

Nicolo Barella and Stefan Di Vrij are both touted to get some much needed rest, while Joaquin Corrrea will probably start the match.

Last 10 Head to Head: Udinese have become somewhat of Inter’s whipping boys in recent history. Inter have seven wins over the visitors who have managed to take all three points off of the Nerazzurri just once over the past ten matches which was all the way back in early 2017.

Lautaro Martinez: The Argentine striker has been on a bit of scoring drought for his club. He came extremely close during the previous match against Empoli, but was denied by some goalkeeping heroics and the goal post.

With his contract extension formally announces, Lautaro needs to demonstrate his value to the club that have put their faith in him as their main talisman for the foreseeable future.

Concluding remarks: This Inter seems to be lacking a bit of cynicism and toughness to really see games out. The win against Empoli followed by a win here can go a long way in re-building that self-belief.