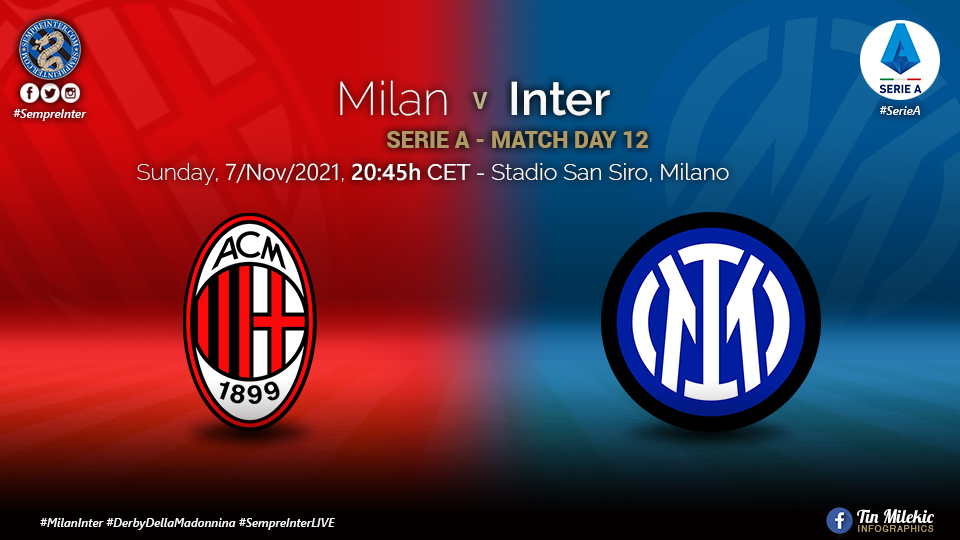 An in-form Inter face joint league leaders with Napoli and city rivals AC Milan, in what seems to be one of the most highly anticipated Milan derbies in years. Match tonight Sunday at 20:45 CET.

Milan have started their Serie A season with a bang and seem to show no signs of slowing down. The red and black team from Milan have dropped just two points in eleven matches so far.

That said, Milan’s league form is the polar opposite of their form in Europe. The Rossoneri have picked up just one point in four matches in their Champions League so far, and Inter might look at their opponents’ European tribulations for clues as to how to stop the hosts.

Milan are a typical Stefano Pioli side that’s doing well insofar as that Pioli’s teams traditionally don’t exhibit much stylistic or idiosyncratic tactics and styles of play, they just seem to do everything slightly better than their opponents do.

However, one of Milan’s stand-out attacking avenues must be their left-back and France international Theo Hernandez. Unfortunately for the hosts, they will have to go into this match without his services as he’s out for a single match suspension.

Inter are on a three match win streak across all competitions, and unlike their opponents, Inter’s midweek win against Sheriff seems to have breathed lots of life into their group qualification hopes.

Inter’s general mood was also buoyed even further on the back of the news that midfield dynamo Nicolo Barella has signed a contract extension with the club.

If Inter are to win the match, the midfield battle between the aforementioned pair against Milan’s Frank Kessie and Sandro Tonali must be won.

Inter’s B-B axis, along with whoever will join them in midfield, must play a perfect match and not allow themselves to be bullied or pressured by the Rossoneri’s counterpart.

This will be a match of fine margins. All chances must be taken and all threats must be elminiated quickly and efficiently.

Inter enter the match on better form but must take this match extremely seriously through all ninety minutes if they’re going to win it.

The Inter treatment room is clear and Inzaghi has no injuries to factor into his tactics and squad selection.

Inter have recently been the far more dominant Milanese side, beating their neighbors in six derbies with Milan winning just once, last season’s reverse fixture.

Hakan Calhanoglu: Hakan’s move across the city to Inter on a free transfer this summer hasn’t been the smoothest of transitions for the Turkish midfielder.

Despite a strong start to the season, the midfielder’s form has recently plateaued which has seen him lose his starting place to Roberto Gagliardini, Matias Vecino and Arturo Vidal on occasion.

Whether he starts or not is irrelevant as the player is largely expected to take some part in the proceedings. it will be interesting to see how he handles the pressure of playing against his ex-club’s tifosi in their “home” fixture.

Concluding remarks: Expect an attacking and open game filled with action and intrigue, after all, this is a match that pits the league’s two highest scoring teams against each other. However, with Inter hitting a patch of good form, expect the Nerazzurri to keep their winning streak going.