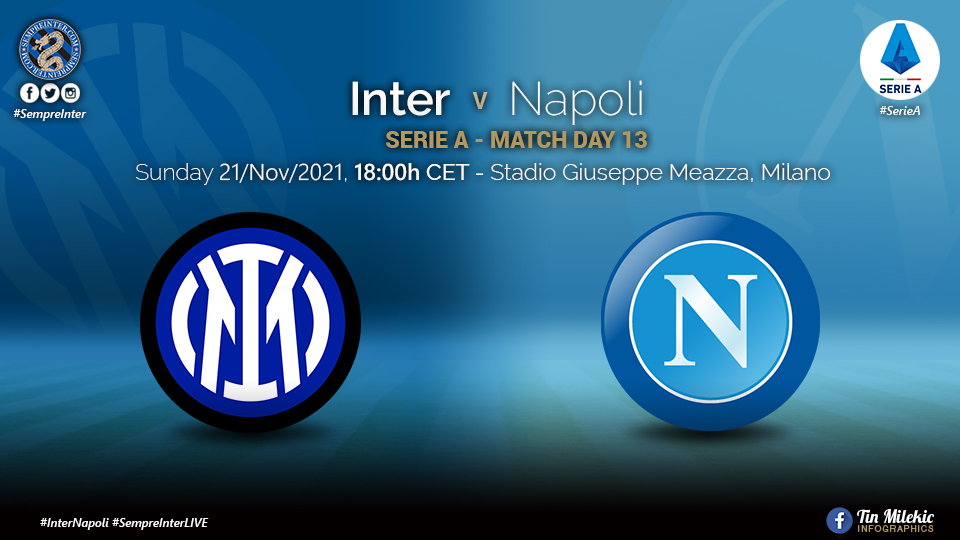 Inter desperately need a win if they’re to keep their title challenge hopes alive as they host league leaders Napoli in an extremely important match. Match today Sunday at 18:00 CET.

It is difficult to overstate the importance of this match and its potential impact on Inter’s season. Inter currently sit in third place with twenty five points, a full seven points behind the joint leaders Napoli and AC Milan.

A defeat will see the defending champions slip a neigh unassailable ten points behind the leaders.

Despite having played fairly well through the season so far, the Nerazzurri’s record against top sides is hardly something to write home about. Simone Inzaghi’s men have not been able to beat Milan, Juventus, Lazio, Real Madrid or Atalanta so far, a truly ominous omen for the match.

That said, these results are not for a lack of trying; it’s arguable that save for the Lazio match, Inter deserved all three points in all the other matches had they been less wasteful in front of goal.

Inter must find their killer instinct against Napoli. The league leader won’t afford them many chances and so nothing can be squandered.

Luciano Spaletti’s Napoli play a version of football more akin to the manager’s tenure at Roma rather than his Inter.

Through the attacking  trio of Matteo Politano, Lorenzo Insigne and Victor Osimhen, the visitors have an interchanging, dynamic and extremely threatening forward line.

That said, the one stark improvement to previous Napolis of late is the defensive solidity. No longer do the visitors need to rely on the defensive heroics of Khalidou Koulibaly, Spaletti has created a side that can solidly defend as a unit.

To beat Napoli, Inter must be at their best all the way through. Expect a tightly contested match with both sides going for the jugular.

Alexis Sanchez is quickly closing in on Stefano Sensi’s lead in the race for the “Man of Glass” grand prix. Despite publicly and distastefully demanding more playing time, the Chilean forward picked up yet another knock during his country’s World Cup qualifier.

Sadly for Inter, their defensive maestro Stefan De Vrij also picked up a knock and will miss the match. The good news is that Edin Dzeko seems to have recovered from his niggle also picked up on international duty.

Last 10 Head to Head: Inter hold a small lead of four wins to Napoli’s duo of wins over the past ten matches.

Edin Dzeko: Inter’s top scorer so far seems to have been struggling with some minor fitness issues during the international break. As such, do not expect the Bosnian to start the match which could be a blessing in disguise for the Nerazzurri bomber as he might be able to expend all his effort without worrying about maintaining form and energy for the full ninety minutes.

Prediction & scorers: Inter 2 – 1 Napoli. Lautaro and Dzeko to win the three points for the hosts.

Concluding remarks: A tough tightly contested match, but expect the hosts to show their desire and fighting spirit and just clinch the match.