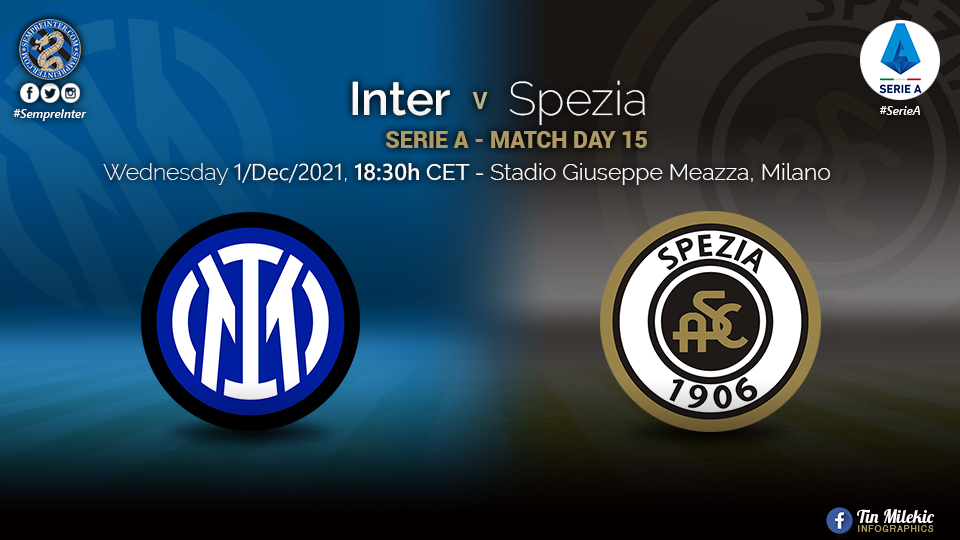 Inter, sporting the league’s strongest attack host Spezia who have the league’s leakiest defense in what could be a cracker of a game. Match tomorrow Wednesday at 18:30 CET.

Inter have come out of a string of important matches having performed extremely well and are now fully back in title contention.

The Nerazzurri will host lowly Spezia this midweek matchday with an eye on all three points to keep the pressure on the two teams ahead of them in the standings.

Hosting the team with the league’s worst defensive record will certainly buoy Simone Inzaghi’s expectations of a result here, especially on the back of a few strong performances in important matches.

Injuries notwithstanding, expect Inzaghi to rotate the starting eleven to some degree. Many expected Nicolo Barella to be rested against Venezia last week, which did not eventually transpire, and therefore he will be a prime candidate to kick it back on the bench this week.

Inzaghi’s Inter are slowly taking a form and shape regardless of who is on the pitch. The young Italian tactician seems to be imparting on his players his philosophy where the style of play supersedes the lineup.

On the other hand, Spezia coach and tripleta legend Thiago Motta’s project with his team seems to be unraveling. Not only is their defensive record poor, the league minnows sit just one point above the drop zone and four points behind their nearest rival.

The team from Liguria really need to get their defensive shape together if they’re to avoid the drop into Serie B this season.

That said, a match against Inzaghi’s high flying Inter is hardly the best place to look for a clean sheet. Inter, as usual, cannot underestimate this match or allow recent successes to get to their heads.

This is a match the Inter are prohibitive favorites to win, and win they must.

It appears that Alexis Sanchez and Arturo Vidal will both be cleared to be called up for the matchday squad. Sadly, Matteo Darmian and Stefan DiVrij are both ruled out of this match along with Andrea Ranocchia and Aleksander Kolarov.

Last 10 Head to Head: There are only two matches that have been played between the two sides, Inter have won once and drawn the reverse fixture last season.

Lautaro Martinez: With a goal scored in the previous two consecutive league matches, it appears that Lautaro has found his scoring boots again.

Much is expected of the Argentine this season and despite having had a reasonable start to the season, Interisti will still be wanting to see more end product from El Toro.

Prediction & scorers: Inter 4 – 0 Spezia. Lautaro hat-trick and Dzeko to win the three points for the hosts.

Concluding remarks: Inter need a soft game for a change. Expect Inzaghi to allow his players to have a bit of freedom and to express themselves.