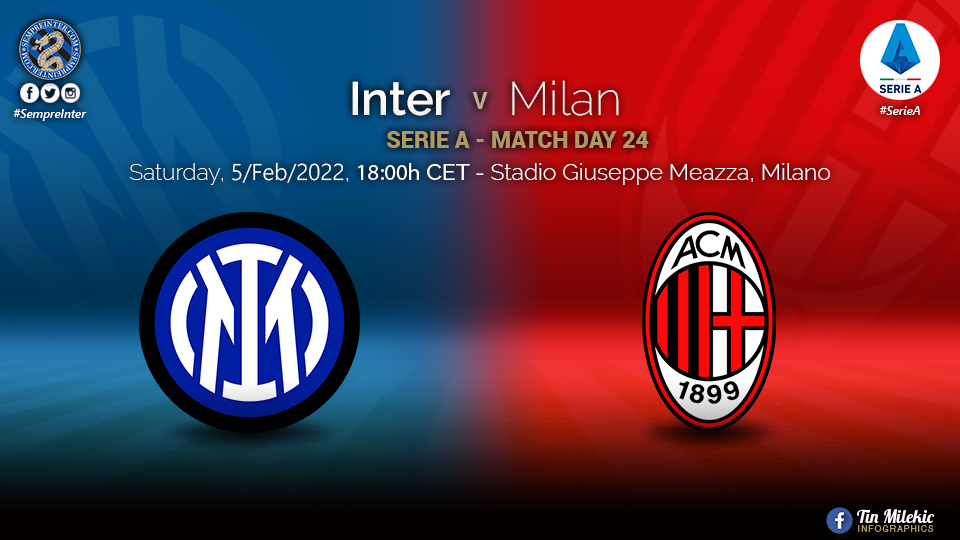 The world’s biggest derby is back and this time the stakes are as high as they’ve been in recent memory. Match tomorrow Saturday at 18:00 CET.

With home game against Bologna in hand, Inter sit four points clear of second place Milan. The Rossoneri know that this pretty much is their last chance to keep any Scudetto challenge aspirations alive.

A win for Inter here will put a probably put the league leaders too far ahead of the chasing pack. And so, expect Milan to come out and put the pressure on the hosts right from the start.

However, Stefano Pioli will be without the services of Zlatan Ibrahimovic and Ante Rebic and thus be forced to rely on Rafael Leao and Olivier Giroud as his main attacking outlets.

It’s also important to remember that two of Milan’s midfield mainstays, Franck Kessie and Ismael Bennacer have just recently returned from international duty at the AFCON.

Simone Inzaghi will be aware of the fitness constrains his opponents will be operating under and expect him to rope-a-dope the visitors for as long as possible, turning on the attacking pressure once the Rossoneri legs start getting weary.

Inter know that the onus is on Milan and that the visitors have much more to lose here. A mature, controlled and level headed approach will be needed above anything else if Inter are to take maximum points here.

The hosts must throttle the Milanisti midfield, preventing them from comprehensively developing any attacking play from the back.

Inter will be expected to play the same game that has served them so well so far this season, with just a modicum of reservedness in attack.

Newcomer Robin Gosens is still nursing his hamstring injury and is unavailable for selection, neither is Joaquin Correa who is expected to be out for at least another couple of weeks.

Last 10 Head to Head: Inter have a strong lead in the head to head encounters recently, with six wins to their neighbours’ two wins and two draws.

Hakan Calhanoglu: The Turkish playmaker was the star of the reverse fixture earlier this season, scoring an equalizing penalty kick right in front of the Curva Sud.

Calha will once again be happy to inflict maximum damage on his ex-employers, this time when the San Siro will be black and blue.

Concluding remarks: Expect this to be a tough fought match where Milan try and apply all their efforts to beat the hosts. That said, Inter’s overall quality and squad depth will shine through.