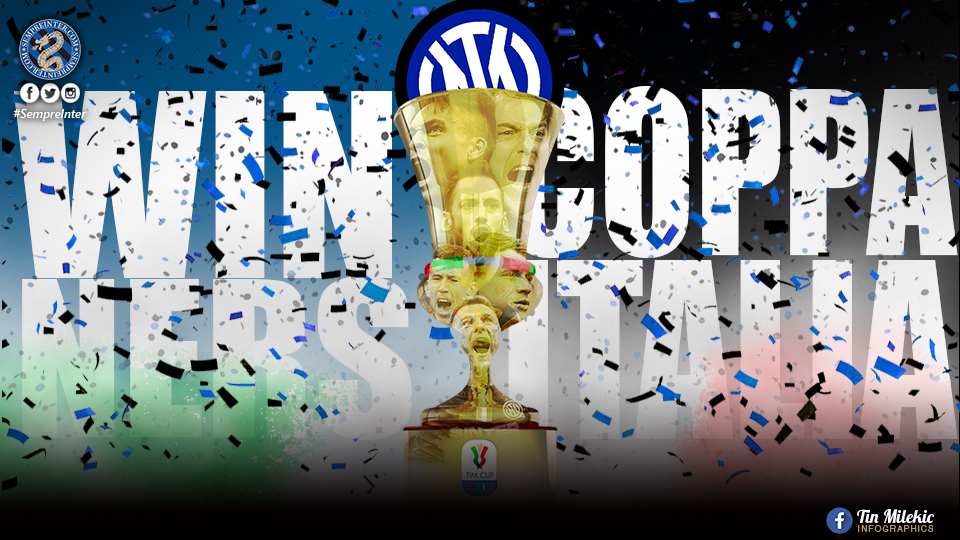 Inter have won their 8th Coppa Italia title after defeating Juventus 4-2 at the Stadio Olimpico in Rome.

The Nerazzurri started the game off brilliantly after Nicolo Barella scored a screamer to break the deadlock in the 6th minute.

In the second half Juventus hit back with a double salvo equalizing via Alvaro Morata deflecting in an Alex Sandro shot in 48th minute, before Dusan Vlahovic scored two minutes later on the counter.

Hakan Calhanoglu equalized in the 80th minute from the penalty spot after Lautaro Martinez brought down and the game went to extra time.

Then it was time for the Ivan Perisic show who first converted from the penalty spot after Stefan de Vrij brought down before scoring a screamer, 4-2.

Inter’s last triumph in the competition came back in May 2011 defeating Palermo 3-1 after a brace from Samuel Eto’o, with a goal from Ezequiel Muñoz sandwiched between the Cameroonian’s brace and Diego Milito’s goal which put the tie beyond doubt.

This was Inter coach Simone Inzaghi’s second title since taking over the Nerazzurri hot seat having won the Supercoppa Italiana 2021, in January of this year, also then defeating Juventus in the final.

It is also the Nerazzurri coach’s second Coppa Italia title in his career, having won his first whilst in charge of Lazio in 2018/2019 season defeating Atalanta 2-0 in the final.

This was Juventus coach Max Allegri’s first ever defeat in the final of the Coppa Italia, having won every one of his previous four Coppa Italia finals with Juventus from 2015 to 2018.