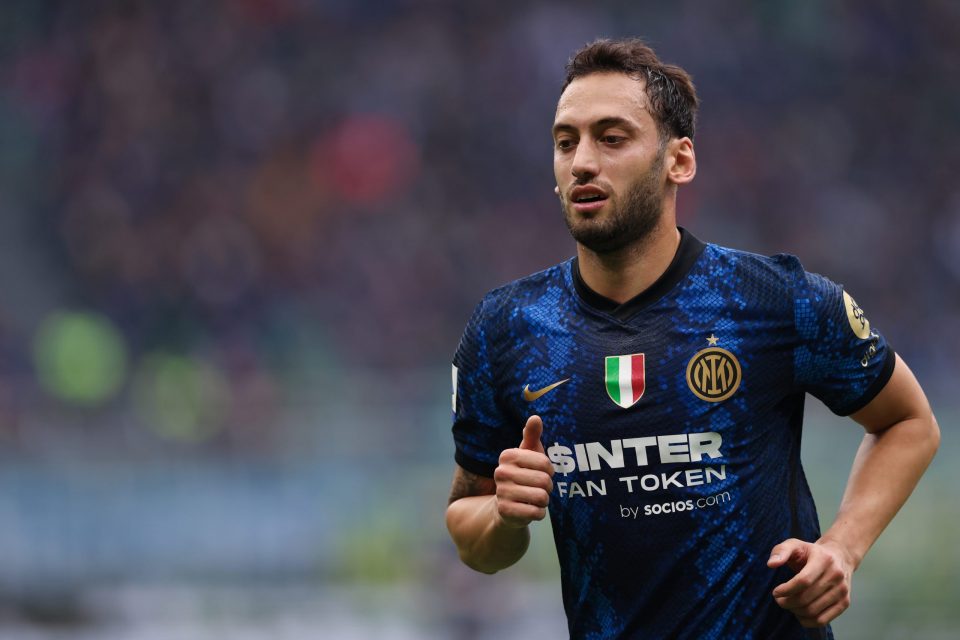 Inter midfielder Hakan Calhanoglu feels that he and his teammates are pushing to win the Serie A title next season, after they narrowly missed out to his former side AC Milan last time around.

Speaking to Turkish news outlet Trivibu Spor, via FCInterNews, the 28-year-old gave his thoughts on the feeling that he must help the team to the Scudetto next season, and also spoke about provocations aimed at him by former teammate Zlatan Ibrahimovic.

Calhanoglu completed a move across Milan last summer, leaving Milan to join the Nerazzurri on a free transfer following a failure to agree a contract extension with the Rossoneri.

The 28-year-old had finished second to Inter in his final season with the Rossoneri, and in his first season as a Nerazzurri finished second once again as the teams’ table positions reversed.

The Turk gave his thoughts on how things have gone since the move, stating that “It was very difficult. Same city, different colours, even just adapting to the team wasn’t easy.”

“But I worked hard,” he continued, “I was very focused on my work. I knew I was joining the Italian champions, this was my chance. Then the team I joined didn’t win the Scudetto, which instead went to my former team – people made it seem like it was my fault.”

“Our goal for next season is once again winning the title,” he said, “good players are being signed as well to contribute, to bring goals and assists.”

“Our team is doing very well,” the midfielder said. “I’m very happy at Inter. The support of the fans also helps me a lot.”

“I played for Milan for four seasons, but no one was jeering my name from the stands,” he continued.

Calhanoglu gave the view that “Inter are a much stronger team than Milan. We lost a derby that suddenly shofted in the 75th minute after Perisic and I were substituted at 1-0, and then we lost 2-1.”

“The coach also contributed to the defeat,” he suggested, “I told him what I thought. In the Coppa Italia, however, we beat them 3-0. This team is very ambitious.”

Of the season just gone, he said that “This has been a really intense, demanding season. We played non-stop, in the Champions League, in the league, and with the national team.”

Regarding taunts aimed his way by former Rossoneri teammate Ibrahimovic during Scudetto celebrations, Calhanoglu said that “He’s a 40-year-old man, I wouldn’t do something like that if I was that age, he’s not eighteen.”

“He likes to be the centre of attention,” Calhanoglu said of the Milan striker. “This year he didn’t contribute much to the Scudetto, he practically didn’t play. But he does everything to attract the attention of fans.”

“I don’t care at all,” the midfielder continued, “it’s not fair for a person who always calls me when I’m in Milan, who wants to go out for dinner and ride motorcycles with me.”

“I respected him and that’s how it was for me,” he said of Ibrahimovic. “He also wrote about me in his book, he had to write that stuff or else his book would have been empty. I won’t respond to him, it’s better not to respond.”

Of Inter coach Simone Inzaghi, Calhanoglu said that “He’s a good person who understands football, who’s very close with the team. He wanted to sign me a lot, his insistence was an important factor in my decision to move to Inter.”

Speaking about his evolution as a footballer, Calhanoglu said that “I train on free kicks in the same way that Nadal trains at tennis. The plays don’t come without training.”

“Sure, you can be talented,” he continued, “but you have to work. But I don’t focus on free kicks as much as I used to because in Italy I’ve grown and improved tactically. I’ve become a player with both kinds of characteristics.”