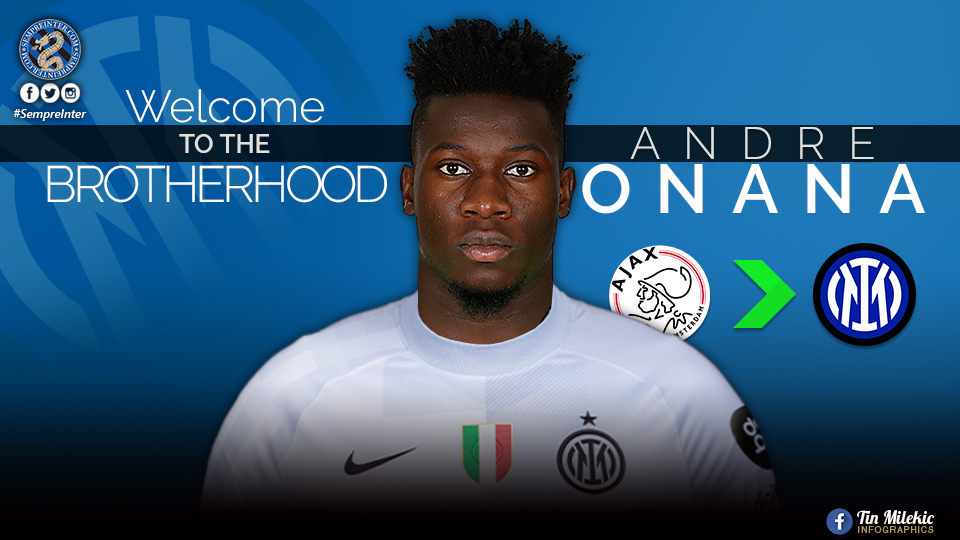 Next in the quick-fire reviews is the highly rumored signing of André Onana. There was a lot of “will he move this window” last season, but he allowed his contract to end and joined on a free transfer.

Obviously, we’ll be comparing him to Samir Handanović but, like the recent Lukaku article, we’ll be expanding our review to include the last two years of stats where possible.

It wouldn’t be a good comparison to only focus on the eight games he played last season after the controversy. All stats were sourced via FBref.com and Wyscout.com and are provided in either “per 90 minutes” or as an overall percentage.

Handanović is currently rated 93rd percentile for goalies in the ‘Top 5 Leagues’ with his 76.4% save percentage; the highest rated for 2021/22 was José Sá, of Wolverhampton Wanderers in the English Premier League, with 79.3%.

That means Onana’s 2020/21 save percentage of 80.4% would’ve seen him top the chart last season; granted, the Netherlands’ Eredivisie isn’t considered a “Top 5 League”, it is still an impressive number especially if you just look at his European competition numbers for the last several years.

Back to the stats though, goals against per game has an obvious bias against Onana for the 8 games he played last season: 1.67.

Passing detailed stats are hard to come by for the Eredivisie, so I can only compare the European cup stats for the 2020 season.

Onana does 1.3 defensive actions per game to Handanović’s 0.71. Of those defensive duels, they are equally good, both having 66.7% success.

Both are also good at their aerial duels, although Handanović is better at 92.7% to Onana’s 81.8%.  Onana makes nearly twice as many interceptions per game as Handanović: 1.17 to 0.65, respectively.

Keep in mind, this stat is only available for the last season.

Unfortunately, the data does not provide the year prior.

Handanović is still a top-tier goalkeeper; his errors and occasional lack of attempting to make a save can sometimes be frustrating, but goalkeeping is a nearly thankless job.

Handanović deserves respect having now been with Inter Milan for a decade coming this season. However, he is getting older and, as time passes, his short-comings above are becoming more memorable; an heir-apparent needs to be ironed-out before “Handa” hangs his boots or transitions into coaching.

Onana’s ability to over-perform for European competitions makes sense why we should give him a shot; his break-out performance in the 16/17 Champions League was incredible, only losing in the final, and he managed a 85.7% save percentage in the 19/20 Champions League.

If he can get back to his usual, pre-controversy form, Onana is potentially a great prince to take over the throne between the sticks.