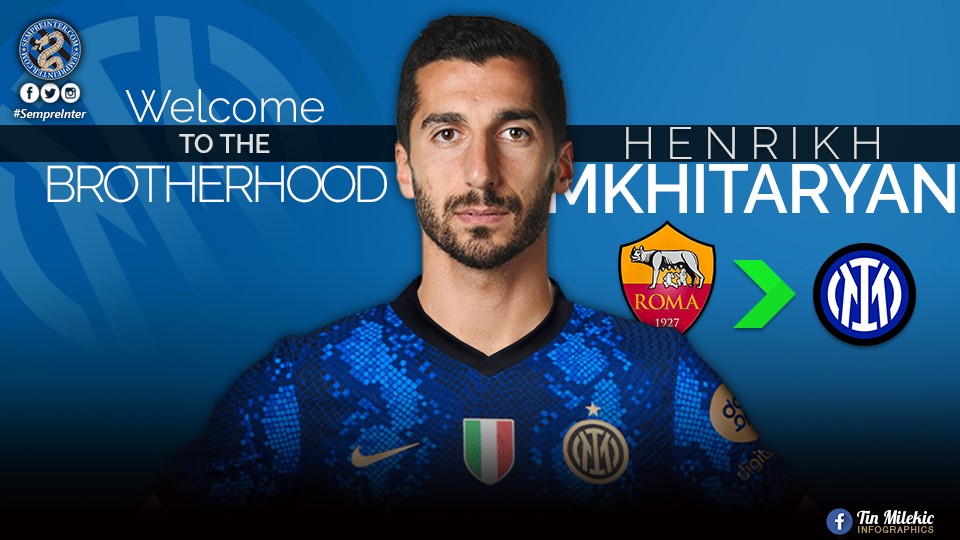 Continuing the quick-fire signings and their reviews, next up is Henrikh Mkhitaryan.

As an Attacking Midfielder, we will be comparing him to Hakan Çalhanoğlu and Nicolò Barella.  All stats were sourced via FBref.com and Wyscout.com and are provided in either “per 90 minutes” or as an overall percentage.

Goal contributions, passing and chance creations, and possession are the key attributes we’ll be focusing on for this group.

Goal contributions: First and foremost, goals and assists were 12, 20, and 15 for Mkhitaryan, Çalhanoğlu, and Barella respectively.

This translates into 0.41, 0.52, and 0.41 per game while the “npxG+xA” (non-penalty expected goals plus expected assists) sit at 0.31, 0.44, and 0.4; this tells us that all of them are overperformers with Mkhitaryan being the highest overperformer.

Their shot on target percentage is pretty low across the board though: 25.4%, 25%, and 18.4% (Mkhitaryan, Çalhanoğlu, and Barella respectively).

“Smart passes”, those that are creative and penetrative, are very relevant to this group.  Mkhitaryan performs 0.79 per game at a success rate of 51.4% (with 0.55 of those per game being key passes).

It seems Mkhitaryan fits right in amongst this group in this category.

Mkhitaryan clearly fits in yet again, but is also a slight improvement on the others.

Also worth mentioning is successful attacking actions per game, that being a shot, cross, or dribble are 3.16 to 2.68 and 2.96.  Again, fitting in and slightly improving over Çalhanoğlu and Barella.

Possession:  Speaking of dribbles, Mkhitaryan successfully does so 49.2% of the time while Çalhanoğlu is 56.7% and Barella is 59.7%.

Pass receiving success is a similar story: Mkhitaryan is 85.9%, Çalhanoğlu is 92.2%, and Barella is 81%.  A real pattern is emerging here.

Whenever an older player joins the team, there’s always apprehension as to whether their abilities to continue at the top level that a Scudetto and European trophy contender like Inter will require.

Mkhitaryan, being 33-years-old at the time of this article, may also bring such concerns; however, the stats read like a blended player between the likes of Çalhanoğlu and Barella, even surpassing them in key areas.

Add the fact that this was a free acquisition, not including salary of course, and he is a great midfielder for the rotation.