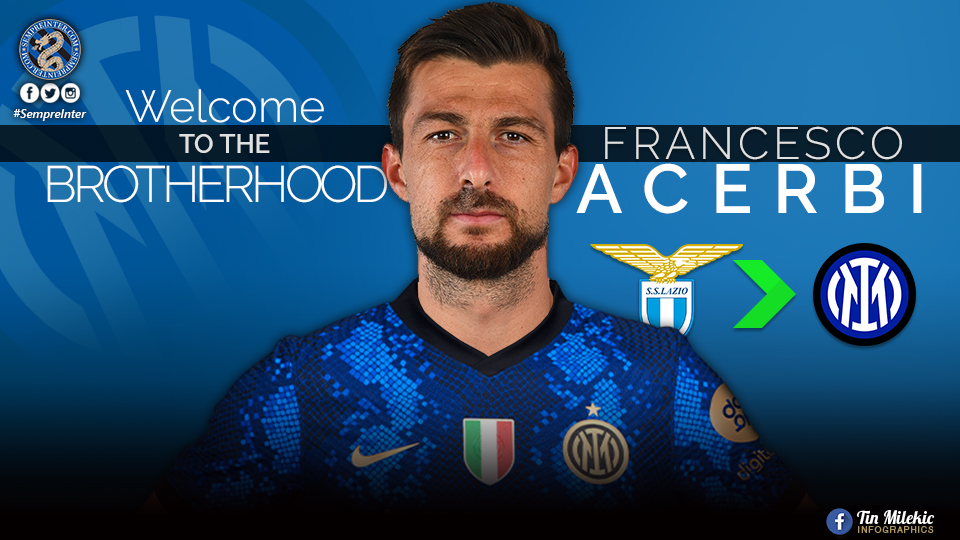 This series takes a look at Inter Milan’s signings during the summer of 2022 and statistically analyzes those individuals’ contributions and how they compare to the current squad.

After Juventus hijacked the transfer of Gleison Bremer, the last bit of business Inter Milan did this summer transfer window is Francesco Acerbi.

It also seems like this transfer was inevitable because, every transfer window for the last couple of years, he has been rumored to move to Inter.

That said, as a Centerback his obvious Inter Milan comparisons will be Alessandro Bastoni, Stefan de Vrij, and Milan Škriniar.

Acerbi is replacing Ranocchia, who left to AC Monza, but he won’t be compared here because he only played a total of 500 minutes last season.

The key attributes we’ll be focusing on are goal contributions, passing accuracy, and defensive contributions.

All stats were sourced via FBref.com and Wyscout.com and are provided in either “per 90 minutes”, as an overall percentage, or a percentile against all Centerbacks in the top 5 leagues; those being the English Premier League, Spain’s La Liga, Germany’s Bundesliga, France’s Ligue 1, and Italy’s Serie A.

These stats are also resourced from the last full season, 2021-2022. Check out Inter latest results.

As we can see, Bastoni exceeded expectations (he was only expected to do 1.9, but did 3 total). Acerbi and Škriniar matched expectations while de Vrij underperformed in this metric.

The ‘npxG+xA’ per game stat sees Acerbi’s 0.12 as a supreme 97th percentile performer in the Top 5 Leagues. Škriniar’s 0.11 is also quite high at 92nd percentile.

De Vrij 0.10 is 84th percentile. Bastoni’s statistics here must be calculated incorrectly because his “xA” stat alone is 0.06 and 90th percentile, but his “npxG+xA” is only 0.07 or 63rd percentile.

For reference, the Top 5 League average per game is 0.07 and the leader last season was Atalanta’s Rafael Tolói with 0.22.

Shot-creating actions (the two offensive actions preceding a shot) is also high amongst our younger defenders.

The Top 5 average is 0.6 per game and Borussia Dortmund’s recent signing of the 22-year-old, Nico Schlotterbeck, is obviously in part to his topping this stat at 1.68.

Defense: Clearly the most important stats for Centerbacks because high attacking quality with bad defensive stats just means someone is playing out of their ideal position.

Defensive actions per game (be that a pressure, tackle, interception, block, clearance, or winning aerials) sees Acerbi doing 16.2. Bastoni did a respectable 22. De Vrij did a declining 18.1. Škriniar only did a shocking 16 per game.

The only stat above that is Top 5 League impressive is Bastoni’s 87th percentile for pressures, at 12.16 per game. No other stat is in the top-third of the 5 leagues.

It’s safe to say that Acerbi does not hold up well in defensive stats.

Conclusion: Acerbi was clearly acquired for his ‘npxG+xA’. The 34-year-old’s loan reeks of a similar vein to the Kolarov and Godin transfers: aging players taking a season detour with us before they continue on to lower leagues or lesser teams.

One has to wonder if his ‘npxG+xA’ is worth the potential lacking in defense; defenders making goals and assists don’t mean much if they give up that advantage on the other end.

Former Inter striker Diego Milito has named current Nerazzurri striker Lautaro Martinez as one of the great players in Serie A, according to a report…