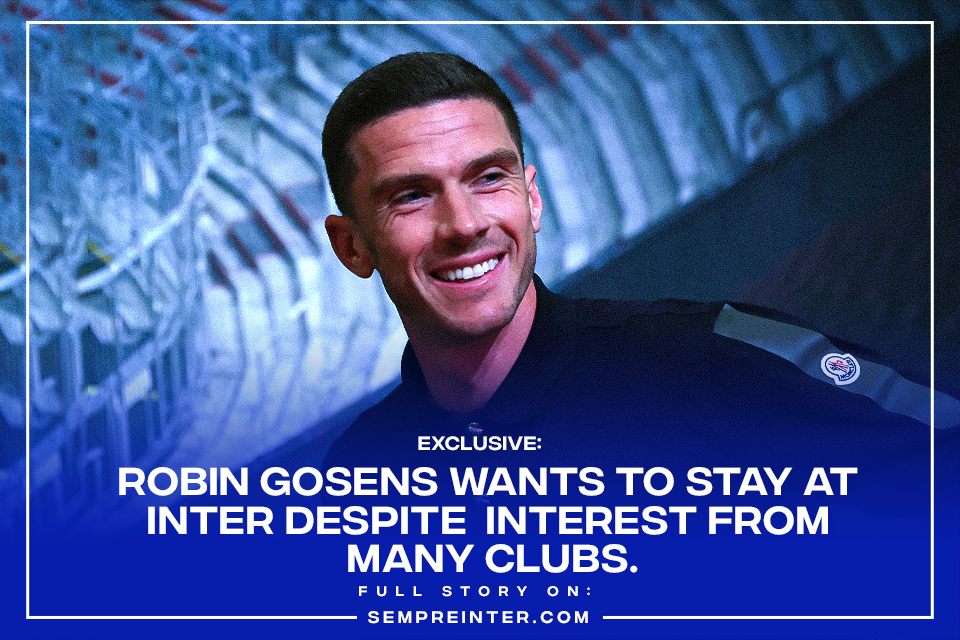 Robin Gosens has decided to stay at Inter Milan until the end of the season amid interest from a whole host of clubs, SempreInter.com has learned.

The former Atalanta player, has decided he wants to end the season with the Nerazzurri in order to prove his real worth at the club, a source close to the player tells SempreInter.com.

Especially now when Gosens physical fitness is once again back at the level it was prior to his injury problems starting at Atalanta, the source continues.

Gosens, who turns 29 in July 2023, has a host of European clubs tracking him.

However, Gosens won’t leave Inter Milan this January. He wants to demonstrate his true ability before departing the Nerazzurri, the source adds.

This despite the very limited playing time the German has received at the Nerazzurri this season. Something he is not happy about, but willing to try to change by proving himself to coach Simone Inzaghi.

The former Heracles player has been linked with a move away from the Nerazzurri during this transfer window for quite some time, but those talks have died down in recent weeks.

This could however, change in the summer but as things stand he is happy at Inter Milan.

Gosens is focused on helping the Nerazzurri achieving their objectives this season. Starting with retaining their Supercoppa Italiana trophy next Wednesday against AC Milan in Saudi Arabia.

Robin Gosens, joined Inter Milan in January 2022 in a deal worth reportedly around €25 million. However he has only featured 30 times across all competitions since making the move, scoring thrice in the process.

The German’s first goal for Inter Milan came against AC Milan in the semifinal return leg of the Coppa Italia last season in a 3-0 win.

The Nerazzurri ended up winning the competition beating Juventus 4-2 in the final.

The other two goals came this season. Gosens scored his first Serie A goal for Inter Milan against Bologna in a 6-1 thrashing at the San Siro.