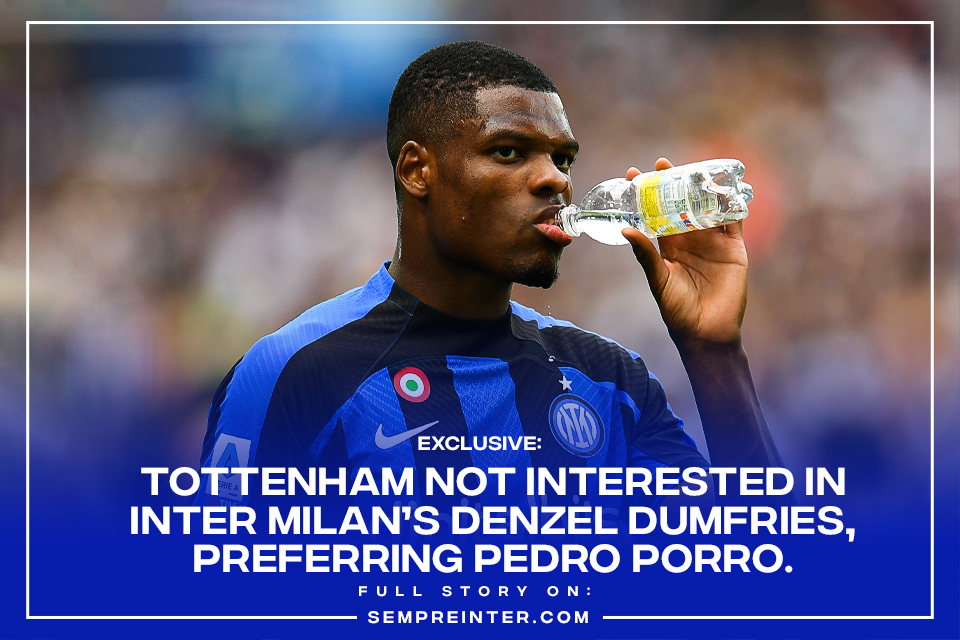 The Dutchman has long been linked with a move to Antonio Conte’s Spurs but the North London club is not interested in him, SempreInter.com have learned.

Antonio Conte left Inter Milan in the summer of 2021 spending two seasons at the club, winning the Serie A title during his last year.

That was the Nerazzurri’s first league title, or Scudetto, in 11 years, and their 19th league title overall.

The former Juventus, Chelsea and Italy coach also helped the Nerazzurri reach the final of the Europa League during his first season in charge at the club.

During his first year in charge of Inter Milan, Conte led the club to a second place finish in the Serie A behind Juventus.

Denzel Dumfries joined Inter Milan in the summer of 2021 for a reported fee of €12.5 million from Eredivise side PSV Eindhoven.

He made the switch after an impressive EURO 2020 campaign with the Netherlands, prompting Inter Milan to sign him to replace Achraf Hakimi.

Since making the switch to Milan, the Dutch international has featured 68 times across all competitions scoring seven goals in the process.

Dumfries also had an impressive FIFA World Cup with the Netherlands this last December in Qatar. This prompted Chelsea, Manchester United as well as Tottenham to be interested in him.

To date, Dumfries has won 42 caps for the Netherlands scoring six goals in the process. He has also won two caps for Aruba, scoring just the one goal.

However, Tottenham are not interested in signing the Inter Milan wingback Denzel Dumfries. This leaves Chelsea and Manchester United to decide whether or not to make a move.

Bundesliga giants Bayern Munich are also rumored to be keen on the Nerazzurri wingback in the past but are yet to make a move.