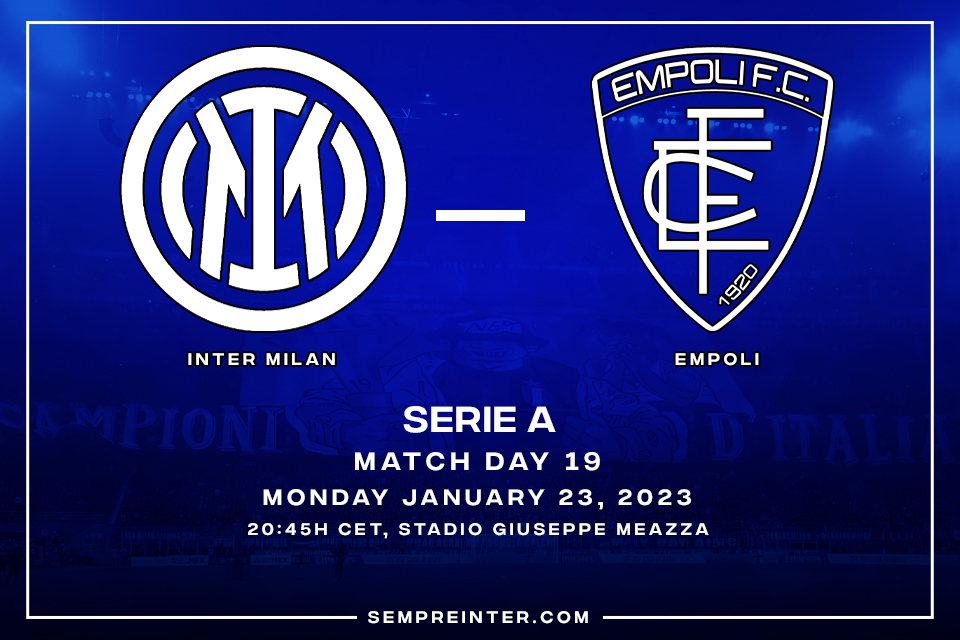 The Supercoppa Italiana winners host an in-form Empoli in Match Day 19 of the 2022/2023 Serie A season where the Nerazzurri are slowly trying to revive their Scudetto hopes. Match tonight at 20:45 CET.

An elated Inter host a very tough Empoli at San Siro on Sunday hoping to start a genuine climb back to the top of the league table.

Paolo Zanetti’s Empoli have been in quite some form. Their last loss came against runaway league leaders Napoli in November and the Tuscans are currently unbeaten in five straight matches, picking up valuable away draws against Atalanta and Lazio on the way.

Despite Empoli’s weak scoring record, with just 16 goals scored so far, the side’s good form is built on being a tough defensive nut to crack.

Inter’s striking dynamic duo of Edin Dzeko and Lautaro Martinez will need to be fully alert in order to find the back of the net against the visitors.

Inter can’t underestimate their competition here, especially coming off the euphoria of the Supercoppa Derby win. If Inter want to be taken seriously as title challengers, they must demonstrate a ruthless winning mentality in all matches, regardless of the opposition or circumstances.

Simone Inzaghi must display his motivational and man management skills here in order to ensure that the side does not suffer from a post cup win hangover.

Marcelo Brozovic and Samir Handanovic are all still out injured. However, Romelu Lukaku seems to have finally recovered from his latest injury.

That said, don’t expect Inzaghi to want to rush the Belgian giant back in the hopes of having him fit for an extended period.

In other news, current captain Milan Skrinniar’s contract renewal (or lack thereof) is dominating headlines in the Inter-sphere.

Inter fans are certainly hoping that the talismanic defender signs the deal and that the challenging negotiations have a limited on-pitch impact.

Last 10 Head to Head: Inter hold an incredible 10 and 0 record against Empoli over the last ten encounters. As a matter of fact, the last time Empoli took all three points was almost two decades ago in 2004.

Edin Dzeko: The Swan of Sarajevo is rolling back the years with his current goal scoring form. Having just put in a Man of the Match performance midweek which was capped with a sensational goal, expect Dzeko to perform well here.

Concluding remarks: It’s always difficult to play a match against ostensibly weaker opposition after a big win. Inter need to be fully locked in and determined not to have a repeat of the Monza debacle.